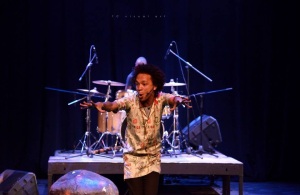 Torsten Tebogo Rybka, known on stage as Clear aka Clear as Fire. Born in South Africa and was raised by his parents and siblings in Ga Rankuwa Unit 8. When he was young, he had discovered his talent for the arts and once he found his feet in the arts, he grew a heartfelt passion with hip hop and poetry. In his early child hood years, he would take time to write, find people to share a word or two. He has found great influence from various artists, from across borders and oceans, locally and internationally. Such people like Common, Talib Kweli, Sunni Patterson, Lebo Mashile, Nthate Lefifi Tladi, and many more.
As the year 2013 came along, he took a leap of faith to release a free downloadable E.P. that consists of 7 tracks (4 hip hop tracks and 3 spoken word poems). That gave him a break through, to perform at stages such as “Nights of the Poets” at the State theatre. A year later, he released a couple of singles that you can find at http://www.bandcamp.com. 2015 he started a poetry movement for the youth in his community, to make a change for the youth in the community and as well for them to find a place to call home away from home, for those who are aspired, inspired by poetry known as U R WHAT U SPIT.
He then in 2016, he produced, directed and performed his poetry production at The State Theatre known as “Speaking from Experience (Growth)” with a Jazz band and a four female choir. The production was then sent to the first ever Trade Fair festival at the Market theatre in Johannesburg, the production won a special merit award, that was awarded to Clear by Pamela Nomvete. 2017 he got to host the Speak Out Loud poetry competition finals and also got to perform at the Oppikoppie Festival in Limpopo. Also got to go to the Washington D.C for a two week poetry tour, hosted by Jonathan B. Tucker
His future plans are to showcase more of his spoken word, work through poetry productions, release anthologies, record the poetry production on an album, mentor more aspired and inspired poets, travel the world and perform on various platforms, make a difference and instill change as much as possible.
Clear: “I believe and know that music is medicine, as well as poetry. I would love to make a difference by healing the world through the medium of hip hop and poetry, from whatever illness it is going through, one word and sound at a time.”