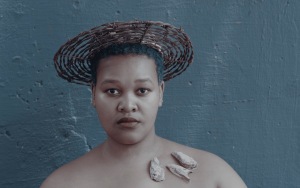 Wazi M Kunene is a performing artist and author born in 1992 in Pietermaritzburg, KZN and now based in Johannesburg. Wazi began performing and writing in 2004 and her journey as a professional artist began after obtaining her Bachelor of Arts degree from Rhodes University in 2012.
Wazi has performed in many stages around the country and in neighbouring countries. She began authoring Zulu children’s books for Oxford University Press in 2015 which are widely used in schools around the country. Wazi has also recently released a photographic poetry anthology titled Deluge In Swarga in 2017 and she co-runs one of the biggest poetry houses in Africa, Current State of Poetry where she also facilitates in Art Administration. Using her artistry together with her passion for education and indigenous languages, Wazi has entered a number of classrooms. She has translated High School Maths and Maths Literacy into her mother tongue IsiZulu and taught it under the Vodacom eSchooling programme in 2015 and The Khan Academy in 2014. These programmes are still running and are effectively used, like the Modlin eSchooling project, where she was the voice artist teaching grades 1 to 4 subjects such as Life Skills, Maths and Zulu literacy. Wazi has interacted with many schools and teachers around the country, running workshops that focus on writing and storytelling. In 2016 she was invited to give a lecture at AFDA to the third year writing class. She has recently been invited to Kairos School of Inquiry for a month, teaching IsiZulu using storytelling to grades 0 to 7. Wazi has also subtitled popular South African television shows such as Tempy Pushas and Uthando Nesthembu.