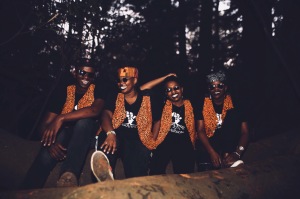 Born and raised in Gugulethu and Cape Town all of BlackRoots’ members had been exposed to marimbas by their early teens, through church and school. However, it wasn’t until Sky Dladla brought this dynamic group of talented women together in 2010 to play together that their love and passion for performance began. The band persevered through two years of jamming, busking and petitioning, all the while juggling their final years of high school and early years of varsity, skepticism from their parents, and ridicule from the more experienced young men trying to make it in the industry. In the end, their hard work paid off, when in 2012 Arm in Arm in Africa (through J.L Zwane Church) sponsored the band with a set of marimbas and BlackRoots Marimbas was formed.

Since it’s formation, BlackRoots Marimbas has built a name for itself as one of the many successful performing marimba bands in the city. Futhermore, it has distinguished itself as an incredibly successful women driven marimba band in the Western Cape region. From annual events – Marimbas on the Lawn and University of Cape Town graduations, to a variety of gigs at weddings, events, conferences, conscious and political learning spaces and more. The band has also been recognized by the Western Cape Government, having been awarded the Promoting Indegenous Music Award in 2013/14. Led by Sky Dladla, who’s own experiences as an instrumentalist specialising in a number of traditionally ‘male designated instruments’ such as the mbira, nyungwe nyungwe, and timbila provide the band with extensive insights and content, Blackroots Marimbas has continued to prove itself as a formidable force of women in a male dominated industry